It was well said by Mr. Albert Einstein “Creativity is intelligence having fun”.
There is no doubt that creativity is the most important human resource of all.
Without creativity, life is nothing but food without salt and pepper.

One such creation is Bhailang! Yes, “Bhai” lang; a new programming language
developed by creative minds from India – Aniket Singh and Rishabh Tripathi.

The new programming dialect took up pace in the social media when the young
minds poured in their creativity and came up with Bhailang, which is said to have
begun as a joke between the two “bros”, giving birth to a new bro code.

Bhailang is a programming language dialect, written in TypeScript, which uses
syntax written in Hindi language. Every instruction in the language contains the
word ‘bhai.’
The word “bhai” in Hindi means “brother”.
While there have been talks among the developers all around social media, how
cool this new programming dialect is, the new bro code is proving how fun can turn things up. The programming language dialect uses words from the casually
spoken words like “hi bhai” – literally starting the program saying “hi”. 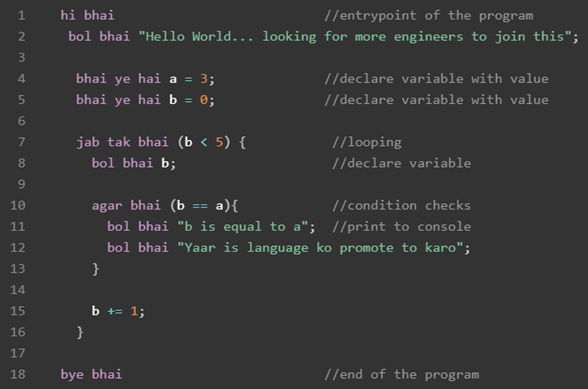 The developers all around started throwing up ideas when the fun lingo gone
viral, contributing even more to the fun.
This fun programming language can be accessed on its website – bhailang.js.org,
while the source code can be accessed here. Check out more what is Twitterati
saying about Bhailang here.

How coding in natural language can change the game ?

Programming isn’t a cakewalk. Although not impossible, it is difficult to learn and
master for an average person. One needs to spend enough time and practice to
be proficient in a programming language, using which one can create a software
application, create a video game, and do things up to one can imagine.

Just imagine, what if you can write code in your native language?

How it would be if you can write code in plain language?

Programming in natural languages can certainly reduce the learning curve and enable easier expression and solutions to the worldly problems.

Although Bhailang cannot be termed a Natural Language Programming tool, it is
worthy to note that such programming dialects can completely change the way
we code. Not just working would be fun, but it has a great potential for the
learners out there. It is not just making programming fun, but enabling easy
expression of ideas, paving way for more creativity.

What is Natural Language “Programming” ?

Using this, one could just type or say “create a page with a form for username and
email, with a signup button at the bottom”; which would then actually create a
webpage with signup form as described.

What is going on in the industry ?

OpenAI Codex is one of the AI models developed by OpenAI, which parses natural
language and generates code in response. Many such platforms are being
developed providing code conversion via APIs.

IBM announced ProjectCodeNet like ImageNet. ImageNet is a large dataset of
images and their descriptions, having an important role in Machine Learning and
Deep Neural Networks to train machines on a vast dataset of images. ImageNet is
useful for many computer vision applications such as object recognition, image
classification and object localization.

Debuild is one such tool built using OpenAI’s GPT-3, which helps to create web
apps easily with as low code as possible by just writing description of what you
want to create.

With the advancement in Natural Language Processing (NLP), frameworks being
developed by the software giants and availability of large data sets, this distant
concept seems to be taking shape now; while these models still have a long way
to go.

Although these models can show a glimpse where the future of coding is heading,
few studies have identified potential problems with the existing models. There
have been incidences of the model translations being incorrect, model not able to
perform the desired task and sometimes giving a biased output as well.
However, the models are constantly being improved for better accuracy and
reduce the risks involved.
It will be interesting to see how far this goes and how easy it will be to have
access to such technology and platforms.

By Akash Goyal - Technological advancements have put everyone in awe, We have witne ...

By Akash Goyal - What are Face Filters? The new generation of technology has always been a ble ...

By Muskan Nande - Dependency injection (DI) is a technique widely used in programming and well su ...

Can an Artificial Intelligence Machine have Consciousness?

- By Vaibhav Agrawal The theory of artificial intelligence has gone through half a dozen cycles o ...